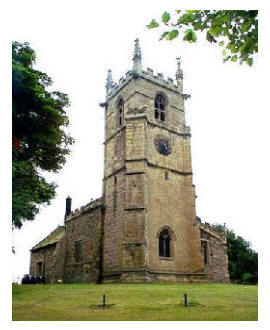 St James' church dominates the village of High Melton, near Doncaster, in South Yorkshire. Originally built by Avice-de-Tania, (who also founded the Priory at Hampole) in 1153AD, it has been extensively extended.

Until at least the reign of Richard II (1377-1400), the church was known as the "Church of All Saints". About this time, a tower was added and a Lady Chapel to the south-east.

The ground plan is rather unusual, having two aisles - open through a short nave within the chancel and the Western Tower, and also a continuous south aisle to the whole length of the church.

It has had several generous benefactors over the years, including the Fountayne family and its descendants, the Wilson family, which changed its name to Montagu following an inheritance. There are substantial memorials to members of these families in the Church.

Benefactors helped to improve the state of the Church in the early 20th Century. In particular, there is a spectacular rood screen and 'Corpus Christi' set of figures (1905) and a reredos and altar frontals (1907) which are the work of Sir William Ninian Comper, who also did much work for York Minster.

St James' is also known for its beautiful windows. John Fontayne, DD Dean of York, is stated to have installed several pieces of mediaeval stained glass obtained throughout the county, and also introduced quite a lot of painted glass (by Peckett of York), giving the church a rich inheritance.

The parish registers of High Melton begin in 1538 (this is unusual as in many other parishes the Registers only date back to the beginning of the reign of Elizabeth I, 1558).

It is part of the Diocese of Sheffield, now under the joint Benefice of St Peter's, Barnburgh, with St. James, Melton-on-the-Hill, and holds morning worship every Sunday