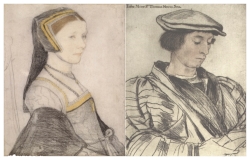 Anne Cresacre, the last of that name, married in 1528 at the age of 18 years, John More, son of the famous Sir Thomas More who was for some time Chancellor during the reign of Henry the Eighth whom he served faithfully and by whom he was executed... oops!

Through this marriage Barnburgh Hall and Estate passed into the possession of the More family who held it for the next three centuries during most of which time they were in residence there.

John More died in 1547 and his widow Anne re-married, 12 years later, a George West of Aughton near Rotherham, whose family was mixed up in the tragic feud with the D'Arcy's of Aston. An interesting feature is that shortly after she married George West, her daughter Annie married the son and heir of George West, thus mother and daughter married father and son. After thirteen years of married life with her second husband, the Cresacre heiress again became widowed, her husband dying on June 12th, 1572.

A brass to the memory of this Anne Cresacre is to be found on the wall of the Cresacre Chapel in Barnburgh Church and seems to hold some mystery. When first made this brass would probably hang in the Hall as it is not of the ecclesiastical style one usually meets with in churches. The inscription is in Latin and one or more words have disappeared, the brass having been cut away. Why?

" Anna the only daughter and heiress of Edward Cresacre of Baronburgh near Doncaster in the County of Yorkshire, Esquire, was married to John More, only (son and heir) of Thomas More Knight, formerly Chancellor of England, which Anna departed this life December 2nd 1577 age 67."

The More family were ardent Catholics and during the reign of Elizabeth the First, at least one of them was imprisoned as a recusant. 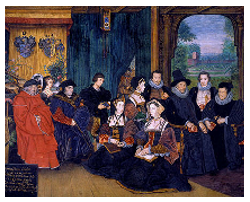 In 1820 Thomas Peter More was recorded as Lord of the Manor but was residing in Warwick...  hey! the lad was a  Brummie !

Read the full history of the painting here