Thanks to Nigel Giles, husband of Anne (nee) Eaton, for the following;

The gentleman in front of the Plumbers Arms, with the horse, is Walter Kent (1883-1949), as you will see from the sign he was the landlord.
Walter Kent married Annie Turner in 1911. Annie's family came from Gainsborough
We are not sure when it was taken but I would guess about 1910. He was my  wife's (Anne Eaton) great uncle on her father's side. Walter died 1949  during the rehearsal of a musical to be performed in Goldthorpe.

His father, Samuel Kent, was landlord before him and died in 1907, so the  photo would be after 1907 when Walter took over. 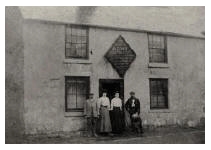 We can't really help with naming the group of 4 outside the Plumbers Arms, it could be Samuel Kent and possibly Lizzie & Florence Kent, Walters' sisters.  No idea who the man on the left was

Anne has many connections with Barnburgh, apart from the fact that she was  married there, she is related to the Eatons, Kents, Merrills many of whom, but not all, are  buried in the churchyard.

The wedding group was taken outside Fox House, where Eaton Square is now

There are two Eatons in this 1950 photo What about the rest of the team where are they now, do you know?

John Eaton was a prominent colliery manager in South Yorkshire. Read his obituary in the Doncaster Chronicle here

He started in mining in Barnburgh Pit, progressed to become a miner's representative and Chairman of Dearne & District Council. He proclaimed the succession of Queen Elizabeth when she became Queen.

Also a JP. He was awarded the 'Order of Industrial Heroism' by the Daily Herald for mine rescue work, we are not sure which mine, but in the Bolton/Barnburgh area. (medal not very clear) Apparently he spent several days 'underground'. There was a plaque in the Goldthorpe Town Hall Entrance. See award here

Do you know any more?  Please tell us here