History of Barnburgh and Harlington 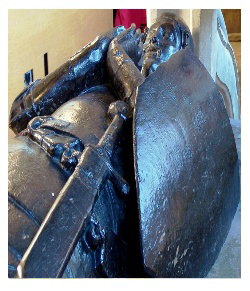 Reproduced from ' A History of Barnburgh' by J Stanley Large

In the fifteenth century there lived at Barnburgh Hall a worthy knight called Sir Percival Cresacre. He was returning home rather late at night from Doncaster after visiting friends or maybe transacting some business, and was ambling gently on his horse along the bridle way which is now the road from Doncaster through Sprotburgh and High Melton.

The district was at that time very heavily wooded, and as he came down the Ludwell Hill a wild cat (or lynx), which was far larger and stronger than the domesticated cat of to-day, sprang out of the branches of a tree and landed on the back of his horse. So maddened was the horse by the tearing claws of the cat that it shied, sprang forward, threw its rider to the ground and ran away. The cat then turned upon the knight and there followed a long, deadly, running struggle between the two which continued all the way from Ludwell Hill to Barnburgh.

By this time the man had been terribly mauled by the fierce claws of the cat and was nearly exhausted. On reaching the Church the knight made for the porch, thinking to get inside the Church and close the door on the animal. The fight had been so fierce, however, and had so told on the man that he fell dying in the Porch, and in his last dying struggle, stretched out, and in so doing his feet crushed and killed the cat against the wall of the Porch.

Thus the cat killed the man and the man killed the cat, and thus they were found some time later by the search party that went out after the knight's horse had returned home rider less

In support of all this, the more imaginative story teller will probably show you stones tinged with red in the floor of the Porch, and the "cat" at the feet of the Cresacre effigy

Now, in most legends there is more than an element of truth, and so I believe it is in this case, but over the years a story like this which has been passed down by word of mouth through the generations is bound to become somewhat distorted.

First look at the red stones in the floor of the porch. Then look at the tower, particularly on the north side, and you will find quite a number of stones of exactly the same colour.

Next, examine closely the "cat" lying at the feet of the knight of the effigy and you will see that it is a lion. Furthermore, as we have seen in previous notes, the effigy is at least one hundred years earlier than Sir Percival Cresacre, and in any case the fact that an animal lies at the feet of the figure can be completely ignored as there are numerous instances in England where an effigy has an animal at its feet. Indeed, it is said to be symbollic of a Crusader (although this is open to question) and in some versions of the story the knight is described as a Knight Templar returned from the Holy Wars.

If this was so it could not have been Sir Percival Cresacre, as the Eighth and last Crusade took place in 1270-1271 and the Knights Templar were disbanded in England in 1308

In support of the legend, however, it must be stated that at one time the woods around here abounded in wild cats.

In the year 1205 a Gerard Canville was granted a licence to hunt the wild cat. In 1237 one of the Earls Warren of Conisburgh had leave to hunt many wild animals including the wild cat. And other licences of a similar nature were granted in 1274 and 1337.

Of the ferociousness of the creatures there can be no question, and as it invariably inhabited the woods, it had to be hunted there. One can imagine the danger there would be if the hunter caught one at bay.

There is, however, evidence to show that wild cats had been exterminated, a long time before Sir Percival died, and although I am more than prepared to believe that a Knight of the Cresacre line died at the hands of a wild cat in some such manner as that described in the legend, I say unhesitatingly that it must have been a Cresacre who lived long before the time of Sir Percival, quite possibly a Crusader.

As a postscript to the legend I must mention that there is a hill at Darfield known as "Cat Hill" and old natives of Darfield claim that this was the point where the famous Cat and Man fight started. This may have originated from the fact that Percival Cresacre's daughter was the wife of John Bosvile, of Newhall, Darfield. 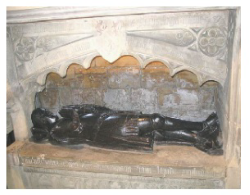 The oaken effigy represents a knight in the military costume of the 11th century, lying on his back with his head inclined to the right. His hands are clasped together in an attitude of humility and supplication, and the head rests on a kind of cushion which appears to have been folded. The legs are crossed and there is a lion at the feet. It has been said that this latter feature commemorates a Crusader, but there seems to be little justification for this belief.

As to costume, the effigy has a slightly conical helmet which connects with chain mail (the Camail) which completely covers the chin, neck and shoulders. The arms are protected with plate armour, the left arm supporting a shield. Plate armour also covers the body, terminating in semi-circular form just above the knees. From there to the feet the protection again is plate armour. A sword is worn, although the lower half is missing, and spurs complete the outfit.

There has been much controversy over the age of this effigy, and a study of the costumes worn in those times will show that the armour of this figure is at least one hundred years earlier than the period of Sir Percival. For instance, the Camail, which is of chain (or ring) mail had gone entirely out of use in favour of complete plate mail long before the days of the knight in question. It has been suggested by learned authorities that this is another instance (amongst scores) where the effigy of some earlier knight (in this case probably Sir Thomas Cresacre, circa 1348) has been appropriated at a later date. In support of this theory it will be noted that the effigy has been cut down, apparently to fit the canopy. Moreover, it will be observed that not one of the inscriptions is on the effigy, all being on the canopy. Further it is more than likely that a canopy or shroud of oak would have been provided had the work been all of one period, or vice versa, the effigy would have been of stone.

It is a curious thing that amongst all the inscriptions on the tomb not one gives the date of the death of Sir Percival, nor is it recorded anywhere else to my .knowledge, though there is an item in the Surtees Society's Publication XXX n.38. which gives the date as 1477, but upon what authority I do not know. We do know that he was alive in 1455 for in that year we find him as a feoffee for his daughter, Isabel Langlin, in the foundation of the Bosville Chantry in Cawthorne Church*, but after that we have no further record of him. This daughter left no written mention of her father's death, nor did any of his other descendants, and he does not appear to have left a will.

After having examined the elaborate tomb of Sir Percival it is a surprise to find that Alice, his wife, had to be content with a single slab let into the floor by the side of her husband's tomb. Cut into the stone of this slab are nine rows of holes about the size of a pea, so designed as to represent a cross of beads an emblem used by the Cresacres. Round the edge is the following inscription :

That part of the epitaph written in English may be found on several other tombs in England.

From the above it will be seen that Alice died in 1450 and if the statement in the Surtees Society's Publication is correct that Percival died in 1477 then he survived his wife by 27 years.