The History of Barnburgh Hall 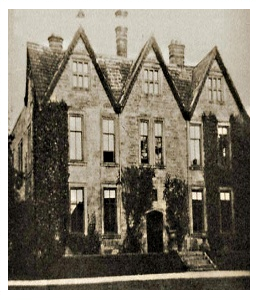 The following is an extract from an article by

This fine old house has a commanding position and overlooks a terraced lawn (probably the original Elizabethan bowling green) and in the distance is a large pond. John More was a catholic and therefore used the pond for breeding fish. This was common practice among catholic families on large country estates in mediaeval times. It was safer for such families to provide for themselves rather than request items out of the estate boundary, for many catholic families found themselves in torment of persecution if their faith was too publicly known.

The principal facade and entrance to Barnburgh hall faces east. a long, narrow passage originally lead from the front to the back of the house and into the courtyard. This now terminates in the staircase hall where a massive Elizabethan studded door still serves its purpose. The principal reception rooms were on either side of this long centre passage. Each entrance to these rooms has been blocked and they now serve as cupboards. The stone, arched doorways are still visible

During the 18th century, the interior was considerably altered. Originally the walls were covered with dark oak panelling and each room was heated by large herringbone brick and stone fireplaces. the oak panels were replaced by 18 th century white pine panelling. its appearance is most classical and consists of large, square rusticated panels divided by full-length fluted Doric pilasters. Behind this woodwork is the original walling and massive arched fireplaces. Such elegant rooms consisted of drawing room, dining room and first-floor bed and dressing rooms. The beautiful oak staircase is another addition of the 18 th century. 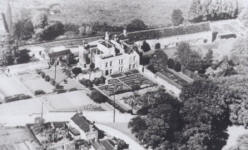 During the many alterations of this period, a number of secret passages and rooms were revealed. a priest 'hide', used during the time of Elizabeth 1st and James 1st for hiding roman catholic priests, existed in a bedroom. It has also been opened, although a small slit in the outside wall, used for ventilation, is visible from both inside and outside the house, along with odd tracery.

In Victorian days, the house was again subject to alteration. The mullioned windows were removed, apart from those in the two gables. The stone windows were replaced by similar-style wooden windows.

Only two houses around Doncaster can boast of having participated in the hiding of catholic priests and they are Barnburgh and Burghwallis halls. Both are Elizabethan in origin and housed catholic families. Now we are to lose the principal object of all village groups  the manor. our great country houses form the backbone of Britain's history and South Yorkshire has always been regarded as the richest  country houses county in Britain. But for how long?

Since King William granted the lands at Barnburgh to Roger de Busli and the Warrens, the owners have been many and varied. It is difficult, however, to trace the occupants of the Hall in its earliest days. Soon after the Norman Conquest the greater part of the Parish was held by the Newmarche family who had a mansion at Bentley and had possessions in Sprotburgh and Cusworth.

Later, possession went to a branch of the Fitzwilliam family, as we learn from a number of deeds still in existence.

Next we find the ownership had passed to a John d'Eyville and from this family it appears to have gone to the Cresacres. That was nearly seven hundred years ago and from then until about 130 years ago it was held first by the Cresacres and then by the Mores to whom it went through the marriage of the last of the Cresacres to John More, son of the famous Chancellor during the days of Henry VIII.

The first written evidence of the Cresacres occupying the Manor of Barnburgh is to be found in the Harlean manuscripts in which a document is preserved which gives a John Cresacre as Lord of Barnburgh in 1281.

From that time, the Cresacres can be traced without interruption, and in the reign of Henry the Sixth, we find Percival Cresacre as Lord. He married Alice, daughter of Thomas Mounteney, a family who were for a long period wealthy lords of a great part of Derbyshire. It is this Percival Cresacre around whom the most romance is cast and he it is who is named in connection with the famous "Cat and Man " Legend.

The last Cresacre of the male line was Edward who was born in 1485 and came into possession of the estate at the age of 16 in 1501 on the death of his father, John, who died on February 3rd of that year. At that time the estate was worth £100 per annum, which in those days was a considerable sum. In addition to his Barnburgh property he held lands in Harlington, Bilham, Hellaby near Maltby, Brampton in Worthing, Thorpe in Balne, Bolton-on-Dearne, Burgh-wallis, Moseley and Bramwith.

Edward Cresacre married Jane, the daughter of Sir Richard Bassett, of Fletborough, Notts, and they had a daughter Annie who was born in 1510, becoming heiress to the estate in 1512 at the age of two years.  The More family continued in possession of the Barnburgh property until circa 1820-1822 and the last to reside at the Hall was Thomas Peter More. In 1820 Thomas Peter More was recorded as Lord of the Manor but was residing in Warwick, and there is a document which gives a Harriott Gyforth as occupant of the Hall in that year.

I think however that this is intended to mean Henrietta Griffith who we know was residing there in 1815. She continued to occupy the Hall until 1835 and was a great benefactress of the Church and Parish

Mrs. Griffith was followed by the Hartop family who were in possession until 1911. The records on the Hartop family vault, which may be found on the South side of the Churchyard near the Porch, show that Ann Hartop, daughter of Henry Hartop, was buried there in 1851. This Henry was buried there in 1865, and his son John, who lived to the age of 86, was interred in the vault in 1902. John's wife, Mary, was laid to rest in 1911 and was the last of the Hartops of Barnburgh Hall.
Since then the Hall has changed hands several times, the first being the Dundas's. The present occupant is G. C. Payne, Esq.
J Stanley Large 1952

The End of the Hall I have been told by a reliable source that the Coal Board demolished the Hall on the belief that it was subject to mining substance.. apparently this was a common excuse they used when they didn't want to maintain their buildings,,, did you work at the hall at the time of the Coal Board?  Did you see signs of subsidence?  Or do you know another story as to why they demolished an important residence?