The History of Barnburgh 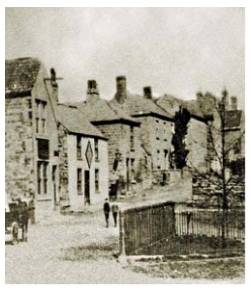 The History of Barnburgh has been taken from  'A History of the Deanery of Doncaster'.

The Ancient Britons and Romans

The present village of Barnburgh is of Anglo-Saxon origin, but the district was inhabited long before that, as is evidenced by the fact that there were at one time three mounds or " barrows " on Barnburgh Common near the Crown Inn. Unfortunately these were levelled under the Enclosure Act  1845 and worse still the work of levelling was carried out by unskilled hands (little was known of these matters at that time) and whatever finds there may have been were not preserved These "barrows" were the communal graves of the Ancient Britons (or Brigantes), and were of two types;

In these " barrows," chambers were often constructed in which the bodies were buried, together with food, vessels, ornaments and implements.

When the Romans came and fought their way North they left traces of their occupation. The road which runs across Mexborough Pastures up to Ludwell and so along to Marr is said by several authorities to be of Roman construction, and this is strengthened by the fact that the fields which lie between this road and St. Helen's Lane were known as Street Flats, "street" or "strata" being Roman for highway. In addition, where this road encountered the River Don near Mexborough was known as Strafford (Roman Street Ford), the exact site of which is still a subject of much controversy.

This road, which probably linked the Roman Settlement at Templeboro with the great Roman Road running North, would be the only road through the district at that time, although it is likely that some of our present roads were already in existence as rough cattle tracks or paths trodden out by the bare feet of our prehistoric forebears.

Further evidence of the Romans have come to light at Barnburgh Cliffs where bodies have been found and silver coins of the reign of Marcus Antonius have been unearthed.

The Saxons and the Normans

The present village, as I have already stated, dates back to the Anglo-Saxons; its name is of that period; "burgh" meaning stronghold and "Beorn" being the name of the early Saxon overlord who founded the village. " Beorn," which meant knight or chieftain, was a common surname in Saxon times.

As with nearly every other place locally, the earliest history of Barnburgh is shrouded in mystery and the first written evidence of any consequence is to be found in William the Conqueror's Domesday Book

From this we find that in A.D. 1060 it was owned partly by a Saxon named Osul and partly by the Saxon Earl Harald who held his part as a dependency of his Conisburgh stronghold.

After the Conquest, however, the territory of the Saxon Earl was given with the Conisburgh lands, to the Warren family who for more than three centuries occupied the Conisburgh estate and built the Castle there. The more extensive portion of the Barnburgh territory belonging to the Saxon Osul was given to Roger de Busli, the powerful Norman Baron of Tickhill

This Barnburgh estate given to de Busli must have been very extensive, for he had on it nine Villains and twenty Borderers. Borderers, or Bordars, were holders of small parcels of land, on condition they supplied their overlord with a certain amount of produce for his " bord." Villanes, however, were serfs or bondsmen attached to an estate and were bought or sold with the rest of the property. They were so tied to the estate that they could not leave it under any circumstance excepting when their lordly master desired. If they left of their own accord they were outlawed. No wonder the country at that time abounded in outlaws!

In the days of Edward the Confessor (1042-1066) the value of the Parish of Barnburgh was sixty shillings, but by the time the Domesday Survey was carried out it had fallen to forty shillings. It was the same in the case of nearly every village in South Yorkshire

We know the Danes had settled extensively in South Yorkshire,  where many place names end in " thorpe "or "by" both of which indicate Danish origin. Now the Danes had, by intermarrying, almost lost their nationality, but their names and customs still proclaimed their origin. In addition to this we learn that their sympathies were still with the land of their forefathers. As a result they took very badly to the rule of their new masters, the Normans, so that in 1069 when the news came that Sweyn, who was then King of Denmark, was sailing up the Humber with his fleet, the people of South Yorkshire were soon up in revolt against the Normans.

When William the Conqueror learned of the uprising and the massacre of his soldiers he swore he would avenge them, and this he did with an intensity and cruelty almost without parallel. This then is why so many of our local villages fell in value

Soon after the Norman Conquest the greater part of the Parish was held by the Newmarche /span>ffamily who had a mansion at Bentley and had possessions in Sprotburgh and Cusworth. Later, possession went to a branch of the Fitzwilliam family, as we learn from a number of deeds still in existence. Next we find the ownership had passed to a John d'Eyvill and from this family it appears to have gone to the Cresacres